School started up again last week and that one start alone was enough to throw just about anything else I had going into a tailspin. One of the results – no blogging.  One week in we are going great though. Classes, all good, teachers, all good etc…

So this week I’m focusing on getting back to focusing on me. Here’s a list of the small starts I’ve made so far this week:  (yeap bullets – other wise known as blog cheating)

This post might end up making me seem like a bit of an ass but bare with me and I’ll try to explain what’s got me a bit fired up.

There are two very big news stories being discussed tonight (three if you count the fact that we seem to be bombing Iraq again but I can’t even think about that) and I think the wrong one is getting all the attention.

My Facebook stream is loaded with post after post after post about the death of Robin Williams. Everyone from neighbors, to my employer, and of course, other celebrities have something to say about it. In fact I’m kind of shocked by how much attention it’s getting.

Don’t get me wrong it’s a horrible and sad turn of events, but what it has not struck me as is surprising. His talent, while genius, has always danced on the edge of insanity. To describe his standup act as “manic” would be an understatement. I’ve always thought that it must be a tremendous burden to live inside his head with a brain that could do all the amazing things his brain could do at the speed at which it did them. And while he was certainly a comedic giant, he was also able to tap into some pretty dark stuff, he never struck as a particularly happy person. This almost seems like an inevitable ending.

Given the above it’s not surprising he battled addictions and depression. But he was also a very wealthy man with every advantage and had clear access to all the help he could possibly ask for. He sought help but it wasn’t enough. In the end he made a choice, a tragic one for sure, but a choice none the less. This is the ending he apparently wanted. We can only pray that that choice has brought him the peace he desired and he most assuredly deserved.

But in St Louis tonight there is a family of a teenage boy who did not make that choice.

But who is also dead none the less, and at the hands of the police.

A boy who was killed on Saturday – and whose death is surrounded in questions. Racial tensions appeared to push peaceful protests beyond peace and looting and rioting ensued. A tragic response to a terrible problem, undermining the intent of those who would be like their voices of protests to heard and acknowledged in a meaningful way.

Later, resumed peaceful protests appear to have been met by amped up police actions ready for more trouble, whether trouble arrived or not – almost willing it to. According to live on the ground twitter reports unarmed people carrying nothing but cell phones have been attacked with wooden and rubber bullets as well as attacked with tear gas. Residents are being denied access to their homes. Police are attempting to quarantine the press and refusing to allow up close coverage of what is happening. Not in the middle east, not in North Korea, but right here in the United States. A no fly zone has been established to help aid in the press blackout.  Property owners are being gassed on their own property, video tape shows them in their own yard with the police coming down the street, they stand with their hands in the air behind their fence and property line – and the police shoot at them.

Even seasoned veterns are starting to question the amount of armor that is being displayed by the SWAT teams.

But not one person in my Facebook news feed has mentioned it at all. No one is upset by any of that.

Maybe it’s just me but I’m far more concerned about racial divides in this country and police misconduct and censorship,  than I am over whether or not there will be another Ms Doubtfire movie. Since when does a celebrity death become more newsworthy, up worthy, or sharable than the police killing an unarmed boy or peaceful protesters being bullied by police?

Mr. Williams led a troubled life but left behind a brilliant body of work that will carry on his legacy for years. Michael Brown never even got to start his freshman year of college, and regardless of the events that lead to the shooting, was unarmed and died at the hands of someone he should have been able to trust with his life. Which of these deserves our attention or outrage more?

Maybe neither is more deserving then the other but certainly they should at least carry equal weight in our consciences and social media streams.

So I’m a couple of chapters into START by Jon Acuff, and right off I identified with his point about one of the barriers to starting is that we want to have the whole thing planned out, and how that just about never happens. That making a small start, “sample yogurt sized” as he puts it, is where it’s more likely to root successfully.

One thing I’ve decided is that out of my ideas that I’m flirting with is that I can’t possible start everything all at the same time. So I need to prioritize. Clearly I’ve put firing up the old blog at the top.. mainly because right now I’m seeing it as a tool for working through the other things. For thinking my thoughts. After that I might tackle one new start every week or so for the next few months. I’m starting small with my starts.

Up Next comes the food thing.

This is one effects the kids so I want put this high on the list. We don’t eat well. We used to before the drama but now, not so much. By well, I’m referring to nutritionally, rather than volume or quality. Two factors contribute to this, first we are on the go all the time with the girls sports schedules. And second I hate to cook, or more correctly I hate to clean up afterwards, the cooking I’m okay with actually. So as a result, given those factors we have snacked and munched our way through summer and very little of it holds that much value.

Summer is ending so it’s a good time to change.

The truth is I’d love to be a whole-food, vegan dish preparing mom whose kid’s lunches are little bento boxes of wholesome organic goodness. That is the BHAG, That is where I get stuck on this food thing. I have felt like it has to be an all or nothing, zero sum change. We have to go all in or not at all. But that isn’t going to happen. At least not overnight. So I sat down to figure out where we can START.

Here are my goals with #EatingBetter:

So there are the 5 rules I’m going to START taking with me to the grocery store and through the drive through and into the take out menu.

I’ll let you know how it’s going next week.

by Melissa
{Shift} has been my motto for the past few years. It was more than a word or a theme, it was a way of life, of survival. When life has been turned upside down and you’re just finding you way through each day, shifting as needed is how you get by. Never expecting anything to be in any particular way, just accepting things as they come as shifting to move through, around, and with them.

Today I found myself unexpectly alone with no kids for an entire day – a weekend day. After a summer of juggling work, kids, sports, and everything else a totally free nothing but me weekend day was a daunting gift.

I had no idea what I wanted to do, I struggled with what to do for most of the morning. I knew if I didn’t get myself out and leave the house I’d regret it – staying home was no way to spend a free day. Finally I decided at the very least I’d go to the grocery store.

As soon as I got out of the driveway and down the road, three or four other things I would rather do and wanted to do occurred to me and as I allowed myself to shift to doing those things instead I realized that I have perhaps developed a problem with all this shifting.. I can no longer easily {Start}. Because action was required of me to initiate something rather than react to it – I was almost so frozen that I didn’t leave, but once I just got in the car and was going, creativity flowed, ideas came, plans hatched.

I’ve become so adept at adjusting to what comes at me, I no longer feel confident to start something on my own. As I’m driving along and considering this, I started thinking about all the ideas I’ve had rolling around in my head the last few weeks.

Starting up this blog again for instance…

Changing how we eat, figuring out some exercise routine, getting serious about my photography and turning it into something more than a hobby, decluttering the house.

These are all things I want to do. But I realized that I can’t get started, I flirt with the idea and roll it around and maybe take a step or two but it seems overwhelming to not have a fully fledged plan so I just never get anywhere.

And then I laughed as the lightbulb in my head went off, yesterday in flirting with the idea of decluttering I had cleaned up a pile of stuff that had been sitting in the laundry room. The only thing I kept from the whole pile of stuff was this book. 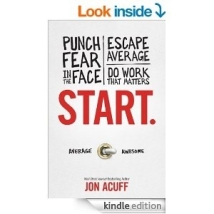 Life has a sense of humor like that sometimes. I have no idea when or why I ordered it and the only reason that I didn’t throw it away with the rest of the junk in the pile was that I thought I might try and resell it instead.

So I have a new reading assignment. And a new word. Start.

Let’s see where that shift takes us…

Yeap, here I am again, considering the blog. I’m not sure exactly why but the last week or two I find myself writing blog posts in my head for the blog that barely exists.

Maybe it’s that school is starting up again in a week or so and subliminally I think I need to starts something again also.

Maybe it’s because S is really getting into writing and making up stories and journalling and she’s reminded and inspired me to do the same.

Maybe it’s still that nagging feeling that it’s important to document this time in lives so the girls will understand it better when they are grown up and look back on it.

Maybe it’s because I’ve enjoyed the #100happydays experimented I started 10 days ago. (I think I might retro that one back into here)

Who knows? Does it matter? I really think it doesn’t.

What matters is that I feel like doing it again and that thought makes me happy.